Arthur was born in Market Drayton on 28 April 1893, the son of Robert Fisher and Sarah Ann Lewis. In both 1901 and 1911, he was living in the households of his uncles, John P. Ibbs and John Birchall, first in Shropshire and then in Cheshire. By 1911, Arthur was a joiner. His father, Robert, died in November 1901, which is presumably why Arthur attended the Royal Orphanage, Penn Road, Wolverhampton, for a period.

In May 1911, Arthur joined the Royal Engineers (service number 21571) as a Sapper. After a year’s training, he was sent to Roberts’ Heights, in South Africa. When war broke out he was drafted in to the front in October 1914 with the 55th Field Company. He rose to become Lance Corporal, but was killed in action on 11 September 1916. He was featured in the Midland Counties Express on 3 February 1917, and is remembered at the Thiepval Memorial

The son of Harry and Margaret Lane, George was born in Dudley on 20 December 1893. His father died in 1903, so George attended the Royal Orphanage in Penn Road, Wolverhampton. By 1911, he was back in Dudley with his widowed mother and brothers Harry and John. George became a woollen merchant’s assistant.

On the outbreak of the war, George enlisted with the 1st Battalion of the Worcestershire Regiment (number 17789), and became a Lance Corporal. He took part in what the Midland Counties Express called “one of the fiercest fights on the West front”, and was killed in action on 13 March 1915. The newspaper featured him on 3 February 1917. He is remembered at the Le Touret Memorial in France. 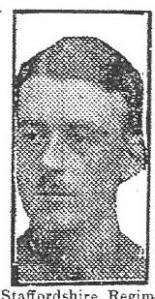 The son of William and Mary Ellen Critchley, John was born in Lancashire in about 1895. In 1901 he was living with his parents and siblings William and Mary Ellen in Burtonwood, Lancashire. John’s father died, so he became a pupil at the Wolverhampton Royal Orphanage in Penn Road. In 1910 he was head boy and very well in his examinations. By 1911 he was back home with his widowed mother, working as a farm labourer, but returned to the Royal Orphanage as an Assistant Master in 1912.

On the outbreak of war, he joined the South Staffordshire Regiment (service number 2968), but was then granted a commission as Second Lieutenant in the 11th Battalion of the Royal Warwickshire Regiment. He first served from 5 March 1915. He was killed in action on 11 July 1916, and is remembered at the Thiepval Memorial. Articles about him appeared in the Express & Star on 18 July 1916 and 22 September 1916, and in the Midland Counties Express on 22 July 1916 and 3 February 1917.

Thomas was born in Bedford on 4 August 1893, the son of Richard Bradley and Mary Margaret Elizabeth Jaggard. His father died in 1900, so at some point Thomas attended the Wolverhampton Royal Orphanage in the Penn Road. By 1911 he was working as an insurance clerk in Bedford, where he lived with his mother and sister, Annie Elizabeth. He worked for the Bedford branch of the London and Lancashire Insurance Company.

In 1915, he enslited in the 26th Battalion of the Royal Fusiliers (service number 19497). He was killed in action in France on 18 September 1916. He was featured in the Midland Counties Express on 3 February 1917, although his initials were incorrectly given as “I. R. Jaggard”. He is buried at the Guards’ Cemetery, Lesboeufs.

Maryon was born in Birmingham in 1885, the son of Thomas and Jane Elizabeth Everton. His father died in Birmingham in 1893 at the age of 45. Because of this, Maryon spent some of his childhood attending the Wolverhampton Royal Orphanage, in Penn Road. By 1901, the 16-year-old Maryon was living back with his mother at 27 Needham Street, Aston, and was working as a commercial clerk for a draper. By 1911 they were at 144 Nechells Park Road, Birmingham, and Maryon was a manufacturers agent for a draper.

On the outbreak of war, Maryon enlisted with the Royal Warwickshire Regiment, and was promoted to the rank of sergeant. He later transferred to the 13th Battalion of the South Wales Borderers, becoming a Second Lieutenant. He went to the front in January 1916, but was killed in action on 10 July 1916 at Mametz Woods, France. He was featured in the Midland Counties Express on 3 February 1917, and the article quoted a letter that had been sent home to his mother, which stated that he “died as only a true soldier can die, valiantly leading his men in the attack.” He was also mentioned in the Express & Star on 22 September 1916. He is buried at Flatiron Copse Cemetery, Mametz. The value of his effects was £1303 0s. 4d.

Thomas was born in Northampton in around 1885, the son of George and Sarah Garratt. By 1911, he was an assistant schoolmaster at the Royal Orphanage, Penn Road, Wolverhampton.

Thomas enlisted in the 7th Battalion of the Northamptonshire Regiment (service number 17337). He was killed in action on 27 September 1915. The Midland Counties Express paid tribute to him on 3 February 1917, stating that he was “much esteemed by his pupils and the staff itself.” He is remembered at the Loos Memorial.

The son of James J. and Laura Williams, Richard was born in Smethwick in 1897. He was living there in 1901 with his parents and brother Walter A. By 1911, however, he was in the Royal Orphanage on the Penn Road, Wolverhampton.

He enlisted with the 2nd Battalion of the Worcestershire Regiment (number 26827). On 10 May 1917, the Express & Star printed a small article about Private James Richard Williams [sic], an “old boy” of the Royal Orphanage, who had been reported as wounded and missing since 1 March. This article noted that he had previously worked at Guest-Keen and Nettlefolds, St George’s Works, Birmingham. It was later confirmed that he had been killed in action on that date in France. His mother was listed as his next of kin, so presumably it was the death of his father that resulted in him being sent to the Royal Orphanage. He is remembered on the Thipeval Memorial.

There is a small article in the scrapbook of First World War newspaper cuttings dated 25 April 1915, which states the following:

The boys at Tettenhall Church Sunday School opened the day’s proceedings yesterday by singing the hymn ‘Fight the Good Fight’, in memory of the late Private E. E. Pugh, of the Coldstream Guards, who was the first of the old boys of the school to be killed in action during the present war. Private Pugh lived in Limes Road, Tettenhall, when he attended the Sunday School, and he afterwards entered the Royal Orphanage of Wolverhampton.

The Commonwealth War Graves site confirms that Ernest Edgar Pugh of the Coldstream Guards (number 8601) was killed on 23 October 1914 aged 22. He was the son of Lydia Fayram Raybould (formerly Pugh), of 2, Tabley Road, Tufnell Park, London, and the late James Benjamin Pugh. 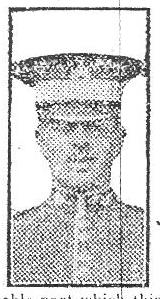 Ernest Edgar Pugh was born in Sheffield in 1892, and at some point the family obviously moved to Wolverhampton. His father died aged 37 in 1900, and his mother remarried to a William J. Raybould in 1912 in King’s Norton. His father’s death is presumably the reason he spent some time in the Royal Orphanage, now the Royal School. Ernest Pugh is commemorated on the Ypres (Menin Gate) Memorial in Belgium. He was featured in the Midland Counties Express on 3 February 1917 as one of the Old Boys of the Royal Orphanage. The article states that he “took part in much very hard campaigning and endured faithfully to the end”.