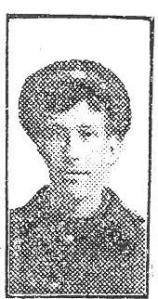 Robert was born in Wolverhampton in 1886, the son of Henry and Elizabeth Taylor. In 1901, they were living at Nursery Walk, Tettenhall, along with Robert’s brothers Edwin and Thomas Edward. He was taught at Tettenhall Church of England School, and later worked in Rochdale for Messrs. Potter.

Robert enlisted in the 2nd Battalion of theSouth Staffordshire Regiment (number 7198), and became a Lance Corporal. He disembarked on 27 August 1914. Shortly after “a famous battle”, he was wounded and came home on sick leave. He returned to the front, but was killed in action on 1 July 1916. He was featured in the Midland Counties Express on 12 May 1917. He is buried at Dantzig Alley British Cemetery, Mametz, France, and is featured on the war memorial at St Michael and All Angels Church in Tettenhall.

The son of Frank or Francis and Emily, Bernard was born in Wolverhampton on 22 November 1896, and baptised in St Andrew’s Church on 2 May 1898. The family moved to Lancashire, and by 1901 were living in Rochdale, together with Bernard’s siblings Ernest, Elsie and Arthur.  By 1911, they were in North Wingfield, Derbyshire, with additional siblings Frederick, Herbert, Ethel and Hilda. By then, Bernard had become an apprentice to a blacksmith.

On 23 February 1914, he enlisted in the Sherwood Foresters (Notts and Derby Regiment) (service number 2124, later 240424). His trade by then was blacksmith/shoeing smith, working for H. Reeses Pilsby. He served in France with the Expeditionary force, apart from a period he spent at home from August 1915 (when he received a gun shot wound to his left leg and foot) until March 1916. He died on 7 November 1918, not long before the end of the war. He is buried in the St. Sever Cemetery Extension, Rouen.