The son of John Foxall and Annie Gertrude Lloyd, William was born in Wolverhampton on 12 March 1891. By 1911, they were living at North Farm, Prestwood Road, Heath Town, Wolverhampton, along with William’s siblings Amy Alice, John Eborn and Francis Charles. William was working as an electrician. He later become an engine fitter. William married Florence May Griffiths in Wolverhampton in 1918, and the couple moved to 59 Bush Street, Springfield, Wolverhampton

He enlisted with the Royal Navy (number M33834) and served from 2 September 1918 on the HMS Pembroke II. Unfortunately, he died of pneumonia on 26 October 1918. He is buried in Holy Trinity churchyard in Heath Town, as well as being remembered on the memorial at Heath Park.

James was born in Wolverhampton in 1881, the son of John and Catherine Westwood. Catherine died in 1901, when James was living with his widowed father at 7 and 9 Hospital Street, Bilston, with his siblings, John, Elizabeth, William, Thomas and Mary. In 1905, James enlisted with the Worcestershire Regiment (number 9045), serving in South Africa. His trade was given as boiler maker. He had two children with Mary Jones, Edith (1906) and Catherine (1910). By 1911 he was stationed at Dover Castle, Kent, with his regiment. Later that year, he married Mary in Holy Trinity Church, Bilston, and they lived at 39 Smith Street, Bilston. The couple had two further children, John J. (1913) and Violet M. (1915).

James was mobilised with the 1st Battalion of the Worcestershire Regiment in October 1914, and served in France. In February 1918, it was recorded that he was suffering from general paralysis, which was aggravated by his war service, “(stress of campaign)”. In April 1918 he was discharged as permanently unfit for military service of any kind. On 20 April 1918, he was awarded the Silver War Badge (number 407267), but unfortunately he died on 22 May 1918. He is buried in Bilston Cemetery and is remembered on the High Town Ward Roll of Honour.

Joseph was born in Wolverhampton in 1891, the son of Benjamin and Priscilla Wilkes. They were living at 63 Prestwood Road, Heath Town, Wolverhampton, in 1901, along with Joseph’s siblings Benjamin, Betsy, Clara, Esther, and John Henry. They were at 67 Prestwood Road by 1911, and Joseph had become a general labourer.

Joseph enlisted as a Gunner with the “C” Battery, of the 149th Brigade of the Royal Field Artillery (number L/11222). he was wounded, and died of these wounds on 30 June 1917 at Fort Pitt Hill Hospital, Chatham. He is buried in Heath Town (Holy Trinity) Churchyard.

Leslie was born in Wolverhampton on 19 October 1900, the son of James and Gertrude. In 1901, he was living with his parents at 95 Gordon Street, Wolverhampton. By 1911, they were at 3 Railway Street, Heath Town, and Leslie had gained four brothers – James Lionel, William Henry, Cyril John, and a baby brother who was under a month old and was as yet unnamed. At some point, Leslie worked as a clerk with the London & North Western Railway at Wolverhampton station.

Leslie joined the Royal Navy Volunteer Reserve at Bristol (number Z/12036) and served at the Royal Navy Depot at Crystal Palace. He died on 13 October 1918, just short of his 18th birthday. In the “Naval Casualties, Indexes, War Grave Rolls and Statistics Book” held at The National Archives but available online via Ancestry, his cause of death is given as “3”, but there does not appear to be a key to what the different numbers mean. Other sources give his cause of death as “died from disease”. He is buried at Holy Trinity Churchyard in Heath Town. By the date of his death, his parent’s address was 6 Crowther Street, Park Village, Wolverhampton. Leslie is remembered on the Heath Park Roll of Honour, as well as on the memorial at Wolverhampton Railway Station. 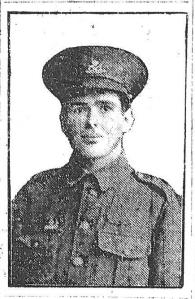 George was born in Somerset in about 1894, the son of George Thomas and Rose Florence Butler. By 1911, they were living at Britannia Cottage, Deans Road, Heath Town, Wolverhampton, along with George’s many brothers and sisters, Thomas Ernest, Ida Lilian, Violet Maud, Mildred Vaughan, Winifred Agnes, Florence Gladys, Robert Wilfred, and Archibald James. George was learning to be a tool fitter at Jenks & Cattell. George was also a member of the Holy Trinity Church choir.

George enlisted with the 1st/6th South Staffordshire Regiment (number 1770), first serving in France from 5 March 1915. On 7 April 1915, when acting as a sentry and getting in position to fire his rifle over the parapet of his trench, he was shot through the right temple by a German sniper. He lay unconscious for four hours, when he then passed away. Details of his death were announced in the Express & Star on 13 April 1915. He is buried at the Wulvergem Churchyard in Belgium, and is remembered on the memorial at Heath Park.

This blog posting has been contributed by one of our volunteers, Lisa Gibbons.

Following the end of the First World War Bilston Town Council formed a War Memorial Committee. They raised funds to erect three memorials, one each in Bilston, Bradley and Ettingshall and to purchase a suitable property and grounds to provide comradely solace to ex-servicemen.

The intention was to set in stone the names of the Fallen Heroes, who had joined up and made the ultimate sacrifice for their country.

The Laburnums, a large house in Bilston, was purchased and converted, with billiards room and grounds in which old soldiers could spend time with their comrades who understood the horrors that had been seen but, for the most part, were discussed with wives and families.

The names were collected by a variety of methods, local churches and chapels sent in members of their congregations who were being mourned, St Leonard’s Church published names of fallen soldiers in the parish magazine. Street surveys were made, knocking on doors and collecting the names from each ward (High Town, Town Hall, New Town, Bradley and Ettingshall). This exercise demonstrated heartbreakingly how many families had lost more than one son, The War memorial Committee also took out advertising in the local paper.

Lists of these names were collated and these formed the content of the Record and programme of the Unveiling of the War Crosses on Friday 11th November 1921. The programme cost three pence.

Following the dedication of the memorials the names and details of several Bilston men who had not been included, for various reasons, were forwarded to the Town Hall. They were presented on scraps of paper, the backs of old invoices and in letter form.

Among the papers held in Wolverhampton Archives is a letter dated 21st November 1921, just ten days after the dedication services. It was written by John O’Neill, who lived at 22 Cambridge Street, but who in 1911 was living in James Street, Bilston with his wife Daisy Maud Williams and young sons John and Leslie. In 1911 he was Bilston’s Town Postman, I wonder if he delivered the letters from the Front and maybe the telegrams that no one wanted to receive?

I should be glad if you would include in your list the name of 5527 Pte. Michael O’Neill, 2nd Battn. South Staffs Regt., who was killed in action at Givenchy, France on May 17th 1915 & who is a Bilston man & who was born and raised in Temple Street.

John explains that he was the youngest in the family and had left this “part of the business to the others who unfortunately must have overlooked it”.

Michael was born in Bilston to Thomas and Bridget O’Neill. Bridget had been married before and was widowed. In 1871 Thomas had married Bridget and the girls were noted as his step daughters, Mary, Honor and Bridget Coyne. They lived at the time in Oxford Street. Michael was the second son born to the couple, he was baptised at Holy Trinity Church on 18th August 1878, (the records show the name O’Neal).

By 1881 our Michael was two years old, with older brother Thomas being nine. Their father was a labourer at a coal mine and he would follow the coal mining occupation until 1901. The family lived at 6, 6ct Temple Street, they had moved to 1 keys Yard in 1891 and the family had been joined by Ellen and young John. In 1901 Michael was not living with his parents only the two younger children were still living in Temple Street. Michael had moved out of his parent’s home but in 1911 was lodging with Widow Dabbs and her family at 15 Pipes Meadow.

Michael O’Neill’s service records are not available; there is a record of his death which states he died on the 18th May 1915 as opposed to his brother’s recollection of the 17th May 1915. He is commemorated at Bethune Town Cemetery (here his name appears as “M. O’Neil”), but I can find no record of his name being included on his home town’s memorial.

Every possible effort has been made to get a correct list of the fallen prepared. Anyone who sees that a name has, after, not been supplied or any other particulars are lacking, should at once communicate with the Hon. Secretary, Mr. Joseph L Arlidge, at the Town Hall, Bilston, who will see that enquiries are made and the names are properly recorded in due course.

Joseph Crowther was born in Wolverhampton on 24 June 1894, to parents Edward and Emma Crowther. He was baptised at Ettingshall Holy Trinity Church on 15 July 1894, and his father was listed as an Iron roofer, living at John Street. The 1901 census has the family at 29 John Street, comprising of Joseph and his parents, as well as a sister Emma (aged 11) and brother Thomas Edward (aged 8). Edward Crowther is a roof slater.

He attended St Peter’s and then the Ettingshall Council School. The Admission Register for the Junior portion of the latter school states that Joseph was admitted on 22 January 1908 and left on 30 July 1908, as he had reached the age he no longer needed to attend (14). His parent or guardian was listed as Edward, of 57 John Street.

In January 1913, Crowther enlisted in the South Staffordshire Regiment (Regiment number 25745), and went abroad in August the following year. He later joined the Royal Army Medical Corps. He was awarded the Distinguished Conduct Medal for helping to dress wounded men while under fire. His citation in the London Gazette (dated 5 February 1918) reads as follows:

For conspicuous gallantry and devotion to duty. In spite of very intense shelling, he set up a dressing station in a shell-hole, and altogether bandaged up and evacuated about fifty wounded. For three days heworked incessantly, without any sleep, doing most of his work in the open under heavy shell fire.