The son of Fanny and John Spencer Iliff, Frederic was born in Burton-on-Trent in 1884. In 1901 they were still living in Burton, together with Frederic’s sisters, Margaret A. and Helen H. By 1911, he had moved to Wolverhampton, and was living on his own at 199 Lea Road. He was working as the manager of a gear cutting works for a motor manufacturer.

Frederic enlisted in the 6th Battalion of the South Staffordshire Regiment as a Second Lieutenant. His name was listed in the Express & Star on 30 October 1914 as one of the local men who had signed up to serve his country, with his address now being 3 Goldthorn Hill, Penn Fields, Wolverhampton. However, he was killed in action on 13 October 1915. He is remembered at the Loos Memorial in France, as well as in the Lady Chapel of St Peter’s Church and on the memorial at St Philip’s Church, Penn.

Susan Martin, one of the volunteers currently working on the Queen Street project, has found out more information about George Norman Adams:

His father had started as a clerk in an iron foundry (Hope House, Bilston) and by 1881 was an ironmaster living Kilston House, Goldthorn Hill, Penn. He described himself as a manufacturer and galvinizer of sheet metal on the 1911 census living at 8 Summerfield, Wolverhampton. This was the Mars Steelworks. In 1888 he had become a member of the Congregational Church, Queen Street, Wolverhampton and became one of the leaders of the Church. He died 23 November 1921 aged 67. From his obituary in the 1922 Church Manual

no matter in what circle one heard of him, in business dealings; with his employees; amongst colleagues in public work and in private enterprise: in the work of the church or intimacy of private friendship and the home, the impression was always the same. Uprightness, honour, diligence, integrity and consideration for others …Later life brought much sorrow and physical pain.

By then he was living Bromley, Penn, and left an estate of of £4359 17s 7d. The death of his son George Norman would have been much of the sorrow.

George Norman had a brother Percy John who became a civil engineer, and sisters Violet and Elsie May. George Norman attended Shrewsbury School. He was a stock keeper and Iron Mill Manager on the 1911 census, living with his parents. He joined the 6th Battalion South Staffordshire Regiment and went to France on 21/5/1915. In around September or early October he was in hospital in Lichfield for an unidentified reason (an attack of…), given leave from 5/10/19115 until 24/11/1915 when it was assessed that he had fully recovered. On the 1 July 1916 the battalion was involved in the Battle of Gommecourt and George suffered a gun shot wound to the right knee. He returned to England on the hospital ship Galena on 20/7/1916 and leave was granted from then until 4/11/1916.

George’s war was, in reality, finished. His knee swelled up after an eight mile march and he couldn’t fully extend it. An abcess had formed after the wounding. On the 14/11/1916 he was deemed unfit for both general and home service, and given three more months leave to be followed by light duties at home. On 6/3/1917 he was passed fit for home service and a month later fit for garrison service abroad, labour battalion abroad or home service. The same on 25/10/1917. He was never sent overseas and appears to have been sent to the 5th Battalion South Staffordshires in Lincolnshire. From there he was admitted on the 8/10/1918 to the 4th Northern General Hospital with scabies and here he died on the 20/10/1918 from pneumonia, according to the death announcement in the Birmingham Morning Post. He had made his will on the 3 May 1918. Probate was granted to his executors, his father and his uncle Tom Bryon Adams, also an ironmaster. His estate amounted to £4608 19 s. 2d. His father received £236 2s 5d from the army. George is commemorated on the Queen Street Congregational Church Roll of Honour.

Richard was born in Dudley in 1881, the son of John and Lucy Berryman. By 1891, he was living with his father and sisters Lucy and Dinah at 17 Shakespeare Street, Wolverhampton. He married Louisa Elizabeth Clark in Wolverhampton in 1904, and by 1911 they were living at 39 Victoria Street, together with their 4-year-old daughter, Gwendoline Margaret. Richard was a boot repairer. They had a son, Richard Trevor, born in Wolverhampton in 1915.

Richard does not appear to have served in the Army during the War, although the reason for this is unclear. He does, however, appear as a Special Constable in the Wolverhampton Corporation list, so he did make a significant contribution.

Richard set up what was to become a leading Wolverhampton boot and shoe retailer, Berryman’s Ltd, which at one point had four branches in the town. A Freemason and a member of the Honour Lodge (Wolverhampton), he also became a director and vice-president of the Freeholders Permanent Building Society. He was a member of the Borough Council from 1932, and was later co-opted on to the public assistance committee and the New Cross management committee. His daughter, Gwen, became famous for playing Doris Archer, the matriarch in the BBC radio soap “The Archers”, from the first episode on 1 January 1951 right up until 1980.

Richard died on 16 June 1955 at the Royal Hospital, Wolverhampton. By this date his address was The Birches, Goldthorn Hill. The value of his effects was £92351 3s. 9d. 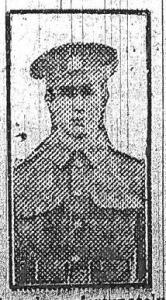 The Express & Star of 7 September 1918 tells the story of the brave self-sacrifice of a Private Watkins, of 2 Goldthorn Hill, Wolverhampton. At the age of only 18, he was lying in hospital with trench fever, when he offered a pint of his blood to save the life of a sergeant in the next bed. Unfortunately his sacrifice was made in vain. He later had three weeks’ leave, when his mother thought he looked very pale, but he had not told her about his act of heroism. Before he returned to France, however, he was presented with a silver wristlet watch and a wallet, subscribed for by the members of the Bilston Brotherhood.

This brave man was George Watkins. He was born in Birmingham on 24 September 1899, the son of George and Florence Watkins. His siblings were Alfred, Leonard, William, Richard and Florence. In 1911, the family were living in Carmarthenshire, in Wales. George enlisted in the West Yorkshire Regiment (number 53758) in September 1917, when his trade was farm labourer.  By this date, his address was at Goldthorn Hill, Wolverhampton. Unfortunately, not long after returning to France, on 17 September 1918, he himself died of pneumonia. He is remembered at the St Sever Cemetery Extension, as well as in St Luke’s Church in Blakenhall.

Ebor was born in Wolverhampton in 1896, the son of Ebor and Elizabeth Ecclestone. In 1901 he appeared with his parents at 159 Park Street, Wolverhampton, together with his brothers Arthur and John, and sister Beatrice. He attended Wolverhampton Grammar School from 1908 until Easter 1911, when he went into banking. By 1911 the family had moved to White Hill, 140 Goldthorn Hill, Wolverhampton. Ebor had become an accountant’s clerk. He worked at Lloyd’s Bank in Wolverhampton, and became a member of the Bankers’ Battalion of the Royal Fusiliers.

He enlisted as a Private with the Royal Fusiliers (City of London Regiment) (service number B/23249). On 4 August 1916, he was involved in a successful attack upon a German trench, and “was seen to fall upon the field”. Initially he was reported as wounded and missing, but his body was found a few days later and buried near the scene of the fight. He appeared in the Midland Counties Express on 23 December 1916. He appears on the Thiepval Memorial.

On this day exactly a hundred years ago, 500 territorial army recruits engaged in a display march around Wolverhampton. Their route, which was lined with spectators, was along Goldthorn Hill, Coalway Road, through Bradmore, and on to Dunstall Park via Tettenhall Road, Albert Road and Leicester Street.

This was reported on in the Express & Star on the same day. Once at the racecourse, despite the damp grass, the men engaged in skirmishing practice:

The men had to drop as commanded; in war, they were told, it would be the choice of a bullet in the head or wet clothes. They therefore indulged in the latter now.

They marched on to the Drill Hall in Stafford Street, singing “It’s a long way to Tipperary.”