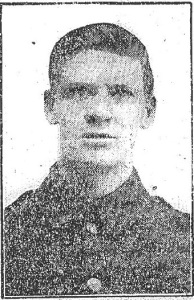 The son of Leah and Herbert Cooke, Henry was born in Liverpool on 14 December 1891. By 1911, they were living at 31 Dudley Road, Wolverhampton, along with Henry’s siblings Maud Coralie, Nellie, Ernest, Phyllis, Edna, Doris, Gladys and Vera. Henry was working as a Safe maker for Chubb’s Works in Wolverhampton.

Henry enlisted with the 1st/6th Battalion of the South Staffordshire Regiment (number 2583). He was killed in action on 4 May 1915. The Midland Counties Express reported on 29 May 1915 that Captain Adams wrote to his family, stating that when Henry was moving from one part of a trench to another, an unaimed shot came over the parapet and his him in the head, and death was practically instantaneous. Adams continued “He was a good comrade, and a good soldier.” Henry is buried at St Quentin Cabaret Military Cemetery in Belgium, and is remembered at the Heath Park memorial.

Benjamin was born in Dudley in 1877, the son of Benjamin and Esther Billingham. In 1900, he and his brother rented a shop at 430 & 431, Dudley Road, to repair bicycles and sell bicycle accessories. Later that year, Benjamin married Adelaide Drewry in Dudley.  By 1911, Benjamin and his wife were living at 2 Elm Farm Road, Wolverhampton with their two daughters, Adelaide and Kathleen. The company went from strength to strength. In 1910 they became the first agents in the country for Ford motor cars. By 1913, the first exclusively Ford car sales and service depot in Wolverhampton was set up in Snow Hill. A separate department was opened for car servicing in Cleveland Street in 1922.

Benjamin’s motor skills appear to have assisted him in giving “valuable assistance with Ambulance work” with the British Red Cross from 1 January 1918 onwards. By then, his address was given as 20 Cleveland Street, Wolverhampton. His Red Cross card has in brackets “Sergeant No. 3 Co. R.A.S.C. M. T. V.”, which indicates that Benjamin did also enlist during the First World War, but I have not been able to confirm further details.

Benjamin died in Wolverhampton in 1931.

William was born in Wolverhampton on 17 February 1878. He was the son of William and Sarah Mason, living at 58 Johnson Street, Dudley Road, Wolverhampton.

He was an established electrical fitter working as an Admiralty Civilian for HM Dockyard in Devonport. He was serving on board the HMS Inflexible, which was involved in various battles, including at Dardanelles. On 18 March 1915 the ship was trying to suppress Turkish guns so that minefields could be swept. Unfortunately, the return fire was heavy, with a number of shells hitting the ship, killing or wounding many on board. One of the men who died was William Mason. He was buried at sea, and is commemorated on the Plymouth Naval Memorial. The value of his effects was £114 9s. 9d. 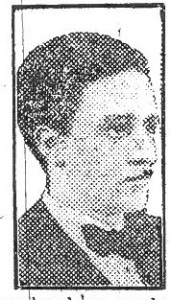 Charlie was born in Wolverhampton in 1891, the son of Charles and Harriet Perry. By 1911, they were living at 65 Byrne Road, Blakenhall, Wolverhampton, along with siblings Henry, Harriet, Lily May and Doris. Charlie was a clerk for a motor works. He later worked as a clerk for Messrs. Bussey, wholesale grocers, of Bilston, as well as being the manager of the Electric Picture Palace at Bloxwich. He was a member of the choir at St Paul’s Church, Wolverhampton, and at St Luke’s Mission, Dudley Road.

Charlie enlisted with the 2nd/6th Battalion of the South Staffordshire Regiment (service number 241649), and became a Corporal. In 1916, he was on active service in Dublin during the Irish rebellion. On 21 April 1917, he was crossing an open field to the trenches when he was hit by a German shell, and killed instantly. He was featured in the Midland Counties Express on 12 May 1917. He is buried at Jeancourt Communal Cemetery Extension, France, and he is remembered on the memorial at St Luke’s Church, Blakenhall.

William was born in Wolverhampton on 14 January 1879, the son of Emily Aubin. In 1901, he was living with his widowed mother, sisters Mary and Beatrice, and brother John, at 453 Dudley Road, Wolverhampton. William was a commercial traveller. William married Fanny Griffiths in 1901 in Wolverhampton. By 1911, they were living at 20 Dawson Street, Wolverhampton, with their three children, Ivy Isabel, Fred Griffith and Charles William. William’s trade was now given as Draper’s traveller.

William does not appear to have served with the colours during the First World War, perhaps due to his age or maybe there were health issues. He did, however, serve on the home front as a Special Constable in Wolverhampton during the war. 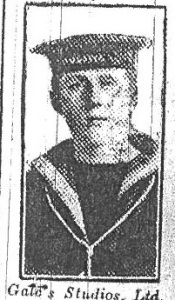 Hubert enlisted with the Royal Naval Volunteer Reserve (number Z/10133). At some point he served on the RMS Moldavia, and was on board when it was torpedoed on the 23 May 1918. He survived this attack, and an account of his experiences appeared in the Express & Star on 1 June 1918. He described how he was woken by a tremendous noise and found the ship listing to port. Wearing only pants and flannels, the crew and the American troops on board went on deck and stood by while lifeboats were made ready. The lifeboats on the starboard side cleared easily, but those on the port side were more difficult, and Hubert’s was one of the last boats to get clear. An explosion followed, and the cruiser reeled over and sank. All but “about 50 or 60 American soldiers” survived. Efforts were made to save those in the extreme end of the ship, but “only those who could swin had any thing like a chance”.

Hubert was fortunate to survive the war. He married Gladys M. J. Howe in Wolverhampton in 1928, but it is unclear whether they had any children. Hubert died in Coventry in 1978. 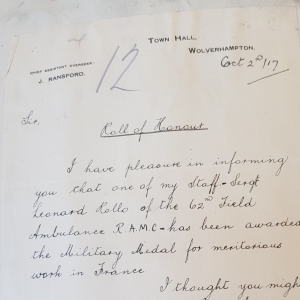 Leonard was born in Wolverhampton in 1890, the son of George Turpie and Margaret Rollo. In 1901, they were living at 18 Dalton Street, along with Leonard’s siblings Edward G., William C. and Gladys. By 1911, Leonard was a boarder in the home of Albert Edward Cuxson at 17 Arthur Street, Dudley Road, Wolverhampton. Leonard was now working as an invoice clerk for an iron founder and hollowware manufacturer. He later worked for the Wolverhampton Chief Assistant Overseer, J. Ransford.

Leonard became a Sergeant in the 62nd Field Ambulance of the Royal Army Medical Corps (number 37194). On 2 October 1917, Mr Ransford sent a letter to the clerk of Wolverhampton Borough Council, Sir Horatio Brevitt, which appears in the Council Communications Book. This letter states:

I have pleasure in informing you that one of my Staff – Sergt Leonard Rollo of the 62nd Field Ambulance R.A.M.C. – has been awarded the Military Medal for meritorious work in France.

I thought you might perhaps like to add this information to the above Roll, and if you consider such an honour warrants it, perhaps you will kindly bring the matter to the notice of your Council.

This request was not, however, taken up, as the eventual Roll of Honour only contained the names of men who had died, and Leonard survived the war.

Leonard married Doris Flynn in Wolverhampton in 1920. The couple had an unnamed daughter in 1922, and a son, Colin, in 1925. Leonard died on 15 July 1932 at the Wolverhampton Royal Hospital, by which date his address was 52 Hazel Road, Oxbarn Estate, Wolverhampton. The value of his effects was £366 1s. 8d.

Ernest, known as Leonard, was born in Wolverhampton in 1898, the son of Percy James and Emily King. In 1901, they were living at 95 All Saints Road, Wolverhampton, along with Leonard’s siblings Elizabeth, Albert, Ethel and Harrold. By 1911, the family were at 361 Dudley Road, and Leonard had an additional sister, Dorothy.

Leonard enlisted in the 2nd Battalion of the South Staffordshire Regiment (number 16291), first serving in France from 16 March 1915. He died on wounds on 15 August 1915 in “No 6 Ambulance”. This was announced in the Midland Counties Express on 4 September 1915, by which date his parents were living at 20A Dudley Street. He is remembered at the Bethune Town Cemetery in France.

Edwin was born in Walsall in 1879, the son of John and Margaret Farley. By 1891, they were living at 86 Dudley Road, Wolverhampton, along with Edwin’s siblings George, John, Eliza, Margaret, Bedina, Charley and Joseph.

On 1 January 1900, he enlisted with the 4th Battalion of the Worcestershire Regiment (number 5672), giving his trade as “packer”. He saw active service in South Africa, and was promoted to Corporal. However, there were some issues. In 1903, he appeared before a Court Martial, accused of “Conduct to the prejudice of good order and military discipline.” It appeared that, on 8 August 1903 at about 10.30pm, he had been drinking beer and creating a disturbance in the Medical Detention Tent at Bloomfontein. He had also neglected to obey regimental orders. He was found guilty, and reduced to the ranks. He reached the termination of his engagement on 31 December 1909.

When war was declared, he was called up to his regiment again. On 28 April 1915, he was killed in action on the Dardanelles. This was mentioned in the Midland Counties Express on 10 July 1915, along with the information that his brother, Charlie, had been serving in India, and that two further brothers, Joseph and Bernard, were in France. He is commemorated on the Helles Memorial, as well as on the Dudley War Memorial, and the Priestfield Roll of Honour.

William was born in Dudley on 19 November 1892, the son of Francis B. and Emma Northall. In 1901 they were living at 8 Brooke Street, Dudley, but by 1911 he was living with his grandmother, Naomi Hemmings, mother, aunt Mary Jane Lowe and siblings Emma Naomi and Charles Stewart at “Adelaide Villa”, 273 Dudley Road, Wolverhampton. William was working as a clerk in the Wolverhampton Tramways Office.

William and his brother, Charles, were mentioned in the Midland Counties Express on 30 October 1915. The photograph shows the two brothers (right and centre) along with Percy Waddams.  All three men were from Blakenhall and worked for Wolverhampton Council. The article confirmed that William had been wounded in the right foot and left thigh and was in hospital in Manchester.