This blog post has been contributed by Archive Assistant Claire Jones. 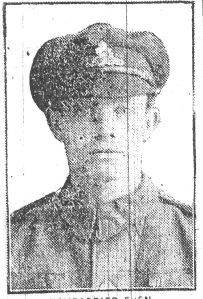 George Eden’s father was a coal agent and the family lived in the parish of St Pauls; at Baker Street, Ashland Street and Great Brickkiln Street. The children were all baptised at this local parish church. Unfortunately, George’s attestation papers have not survived but there are a few other records that can tell us his story.

He originally served as part of the Territorial Force of the Royal Field Artillery as Gunner 1075 but became Bombardier 810117. He was admitted to the 138th Field Ambulance RAMC as patient 13077 pm the 28/7/1917, suffering from boils. This record tells us he had served 4.5 years with 25 months field service ie he joined the RFA TF force around January 1913 and served overseas from 1915. This tallies with his Medal Rolls Index Card which gives a date of entry in France as 28th February 1915.

George was awarded the Military Medal, which was awarded to personnel of the British Army below commissioned rank, for bravery in battle on land. He was gazetted on the 19th September 1917. At this point he was a Bombardier serving in France as part of the A/232nd (N. Mid) Brigade RFA (TF). It was reported in the Express and Star on 20th September 1918. He married Gladys Dawson in the third quarter of 1918.

In December 1917 the newly formed Wolverhampton Patriotic Committee held a ceremony at the Agricultural Hall for George and two other men awarded the Military Medal. Each man had the medal pinned on and received gifts of gold watches. Unfortunately, at that point, the reason for George’s award had not been received. (Birmingham Daily Gazette).

George lived until 1976, staying in Wolverhampton. In 1939 he was living at Bristol Street and gave his occupation as an electrical cable joiner and was noted as being a member of the ARP No 7. As a survivor of the war, he does not appear on any Wolverhampton war memorial.