Joseph initially enlisted with the South Staffordshire Regiment (number 7407), before transferring to the Sherwood Foresters (Notts & Derby Regiment) (service number 29918). He was killed in action on 31 July 1917. Lily later remarried, to a John R. Rhodes, and lived at 55 Coventry Street, Willenhall Road, Wolverhampton. Joseph is remembered at the Ypres (Menin Gate) memorial. He is also remembered on the memorial at Wolverhampton Railway Station, where he was employed as a goods porter, and the memorial on Deans Road.

James was born in Sedgley in about 1897, the son of Josiah and Sarah Ann Darby. In 1901, they were living at 14 Manor Road, Sedgley. By 1911, they were at Pinfold Lane, Merry Hill, Penn, and James had gained two siblings – Walter Jeavons and Mary Crossland.

James enlisted at Birmingham in the 1st/8th Territorial Battalion of the Royal Warwickshire Regiment (service number 2881). He was killed in action on 1 July 1916. He is commemorated at the Thiepval memorial, as well as on the Bradley Memorial, and the memorial for Wolverhampton Higher Grade School.

Bert was born in 1889 in Coseley, the son of William and Mary Ann Caddick. In 1901, he was living with his widowed mother and sister Edith Caddick at 13 Foundry Street, Sedgley. By 1911, his mother had remarried, to a Samuel Haynes, and Bert was living with them, his step-brother Joseph Haynes and step-sister Maud Haynes, at 35 Darkhouse Lane, Coseley. Bert had become a labourer at an iron foundry. On 26 May 1912, Bert married Alice Ellen Taylor in Bilston, and they had a daughter, Amy, born on 6 March 1914.

On 2 November 1914, Bert enlisted with the 94th Siege Battery of the Royal Garrison Artillery (service number 49784), by which date his trade was given as gas worker. His wife’s address was given as 20 Royal Oak, High Street, Bilston, and later 31 Temple Street, Bilston. He became a gunner. He was invalided to England on 1 April 1917, but recovered, only to be killed in action on 26 October 1917 in France. He is buried at Coxyde Military Cemetery in Belgium, and is remembered on the Bilston High Town Ward and New Town Ward Rolls of Honour

Edwin was born in Wolverhampton in 1895, the son of Alfred and Emma J. Adams. They were living at the back of 89 Great Brickkiln Street in 1901. By 1911, Edwin was living at 80 Merridale Street West, Wolverhampton, along with his parents and siblings Emma J. and George H.

Edwin enlisted with the 1st/6th South Staffordshire Regiment (service number 2060 and later 240203). He first served in France from 3 March 1915. He was killed in action on 24 June 1917. He is commemorated at the Arras Memorial, and on the memorial in Heath Park.

William was born in Wolverhampton in 1878, the son of William and Rose Zillah Spooner. In 1891, they were living at 67 Muchall Grove, Penn, Wolverhampton, along with William’s siblings Ellen M., Edwin A. and Ernest G.

William enlisted in the 173 Brigade of the Royal Field Artillery (service number L/26051), becoming a Driver.  He first served in France from 27 November 1915. He was wounded, and died on 28 October 1918. He is buried at the Moorseele Military Cemetery in Belgium, and his great great niece has remembered him here.

The Midland Counties Express dated 23 October 1915 carried this photograph of the five sons of Mrs Smith, of 78 Neachells Lane, Wednesfield, who were serving in the Army:

These were the sons of John and Selina Smith, living at 23 Wolverhampton Road, Heath Town, in 1901, along with further siblings Harry, Alice and Sarah.

George William was born in Aston in about 1891.

Howard Abel was born in 1894 in Aston. He survived the war, and died in Wolverhampton in 1976.

Because of the common names, I have not been able to confirm any further details about this family, so if anybody can fill in some of the gaps, I would really appreciate it. 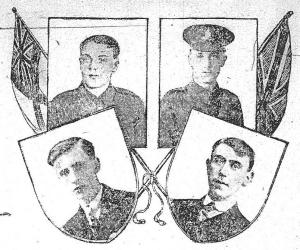 The Midland Counties Express on 23 October 1915 carried this photograph of the four sons of Arthur Hayward, of High Street, Bilston:

William was born in about 1891. He was a butcher in 1911. I have not been able to confirm further details of his life or military service.

Arthur was born in about 1895. He was a turner at a motor works in 1911. He enlisted with the South Staffordshire Regiment (number 1922), and served in France from 5 March 1915. He was killed in action on 13 October 1915. He is remembered on the Loos Memorial, as well as on the memorial for Sankeys at St Leonard’s Church, Bilston and the Bilston High Town Ward roll of honour

Herbert was born in Wolverhampton in 1896. On 5 March 1914, he enlisted in the 6th Battalion of the South Staffordshire Regiment (service number 2157 and later 240233). His trade was listed as Metal Turner, working for Armstrong & Stevens of Willenhall, and his address was given as 55 High Street, Bilston. He served in France and Egypt, and survived the war, being demobilised on 11 June 1919. He married Amelia E. Jones in Wolverhampton in 1920, and they appear to have had three children – Olive M. (1920), Nellie (1921) and James A. (1922). Unfortunately Herbert died in Wolverhampton in 1921.

Jack or John was born in Wolverhampton in around 1901, but I have not been able to confirm any further details about his life or military service. 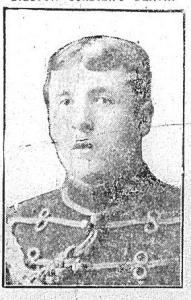 Samuel was born in Dudley in 1894, the son of Samuel and Henrietta Jane Forrester. In 1901, Samuel was living with his parent and maternal grandparents Robert and Jane A. Smith at 85 Lunt Lane, Bilston. In 1911 they were living at 23 Queen Street, Bilston, along with Samuel’s sister, Jenny. Samuel was a bricklayer’s labourer.

Samuel first served in the 3rd South Staffordshire Regiment, before transferring to the 3rd (King’s Own) Hussars. He first served in France from 26 January 1915, but was killed in action on 25 May 1915. His photograph was published in the Midland Counties Express on 26 June 1915, by which date his parents’ address was given as 130 Oxford Street, Bilston. He is remembered at the Ypres (Menin Gate) Memorial, and may be the S. Forrester listed on the memorial of St Chad and St Mark’s Church.

This photograph appeared in the Midland Counties Express on 6 November 1915, the three sons of Mr and Mrs Ellis of 8 Wolverhampton Road, Priestfield:

These were the sons of Joseph and Sarah Jane Ellis, who were living at 22 Stow Heath Lane, Priestfield, in 1911, along with their sisters, Nellie and Lizzie.

Leonard was born in Bilston in 1884. He was a holloware Worker for a Tin Department in 1911. Leonard served with the South Staffordshire Regiment (service number 2392 and later 36507). He was discharged on 1 July 1917, as he was no longer physically fit for War Service, as a result of the wounds mentioned in the newspaper article, which he received on 13 October 1915 at Loos. He was awarded the Silver War Badge (number 199345) on 13 June 1917. I have not been able to confirm further details of his life.

William was born in about 1893. Like his brother, he was a holloware Worker for a Tin Department in 1911. However, I have not been able to confirm details of his military service or his later life.

Bernard was born in Wolverhampton on 27 October 1896. I have not been able to confirm details of his military service, but he survived the war and married a lady called Isabella. After the war, Bernard emigrated to America, and died on 6 January 1962 in Gary, Indiana. 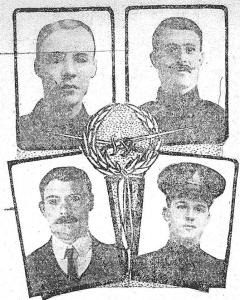 On 6 November 1915, the Midland Counties Express printed the photographs above of the sons of Mrs Hudson of 31 Dartmouth Street, Wolverhampton:

Harry was born in 1898. He was the only one of the sons still living with his parents in 1911, at Court 4, Sutherland Place. The 14-year-old Harry was an errand boy for a fruiterer’s. I have not been able to confirm details of his military service or details of his , although he did survive the war.

Harold Edward was born in Wolverhampton in 1886. By 1901 he was a striker at the Edge Tool Works. Harold married Lucy Clift in Wolverhampton in 1906, and by 1911 they were living at 51 Bank Street, Park Village, Heath Town, and Harold was now a railway Carriage Cleaner. From 12 August 1914, Harold served with the 3rd Worcestershire Regiment (service number 7405). However, he was killed in action on 12 March 1915. He is commemorated on the Ypres (Menin Gate) Memorial, as well as on that at Heath Park.

John was born in Wolverhampton in 1884. Like his brother Harold, he was a Striker at the Edge Tool Works in 1901. I have not been able to confirm details of his military service or further details of his life.

Herbert was born in 1891, but again I have not been able to confirm any further details.