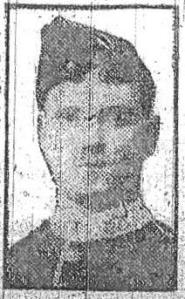 John was born in Wolverhampton in 1883, the son of William Gaunt and Mary A. Bywater. His father, William, died in 1888, and his mother remarried a Frederick Alfred Jackson in 1895. By 1901, John was living with his mother and step-father at 42 Chester Street, Wolverhampton, along with his siblings Amelia, Mary A., and Phoebe, and niece Eveline May. John married Annie Britton Godfrey in 1906 in Aston. In 1911, they were living at 2 court, Eagle Street, Wolverhampton, together with two children, John and Rose. Apparently they eventually had five children, but I have not been able to confirm details of the other three. John was a labourer for a nut and bolt manufacturer. He later worked for Bayliss, Jones and Bayliss

John served in the South African War. When the First World War broke out, he was called up to the 2nd Battalion of the South Staffordshire Regiment (number 6744), disembarking on 12 August 1914. On 30 January 1915, he was reported missing and an article about him appeared in the Express & Star on 20 January 1916 (it is this article which claims he had five children). This stated that the Army Council had communicated to his wife, concluding that his death took place on 27 October 1914. It was later confirmed that he had been killed in action on that date. He is commemorated at the Oosttaverne Wood Cemetery in Belgium, as well as on the Monmoor and Victoria Works Memorial.