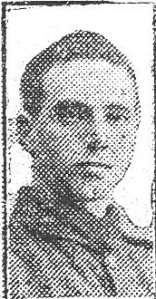 Josiah was born in Wolverhampton on 2 August 1895, the son of Joseph and Emma Blythe. In 1901, they were living at 18 Herbert Street, Wolverhampton, along with Josiah’s siblings John, Lilly and Lizzie. From 18 August 1909, he worked for the Great Western Railway as an office boy. The family were at the same address in 1911, by which date Josiah had become a boiler maker for the Great Western Railway. He had gained two brothers, William and Harold. As well as working at the Stafford Road Works, he was also an attendant at the Hippodrome.

On 20 October 1914, Josiah enlisted in the 6th Battalion of the South Staffordshire Regiment (number 3455, later 240827). He was appointed Lance Corporal in 1916 and Corporal in 1917, and served for a month in Egypt and then in France from 1915 until 1918. In July 1918 together with another corporal and a private, Josiah carried out a successful daylight patrol. Having established the position of an enemy post, they forced their way through and effected its capture, bringing its occupants to the British lines. For this action, Josiah was awarded the Military Medal. This was announced in the London Gazette on 21 October 1918, and identical articles appeared in the Midland Counties Express on 5 October and the Express & Star on 2 October. On 7 October 1918 he received a gun shot wound in the thigh, and returned to hospital in the UK. In January 1919 he was discharged.

Josiah died in Shrewsbury in 1974.