One of our volunteers, Frank Lockley, has been researching some of the soldiers buried at Heath Town Cemetery. Here is the first of his reports:

Frank Lineker was born in Nottingham, son of George and Martha on 6th December 1890. It is not clear when the family moved to Wolverhampton, but Frank appears in the Admissions log of Moseley Village Board School on 9th September 1895 with a home address of Willenhall Road.

In 1911 the family is living at 101 Willenhall Road, Moseley Village and Frank’s occupation is a wood turner.

On 9 September 1914, Frank’s name was listed in the Express & Star among a list of men who had signified their willingness to join the army. He enlisted on 25 November 1915 in Birmingham, when he is living at 76 Sherlock Street, Birmingham. He joined as a sapper in the Royal Engineers 1st Reserve Battalion, based at Chatham Kent.

Frank’s service records show that he was a skilled wood turner and he only served at Chatham.

His medical papers record that he was admitted to the Fort Pitt Military Hospital in Chatham on 13th March 1916 with pneumonia, and died on 1st April, “…he was very ill from the time of admission and never responded to treatment”.

The service records also contain correspondence from the Royal Engineers Record Office to Frank’s family confirming that as requested, arrangements had been made to transport his body to Wolverhampton for burial and also asking for details of the burial place. A note from Frank’s mother giving details of the burial is also included.

Volunteer Frank Lockley has been researching the soldiers buried at Heath Town Cemetery:

The Commonwealth War Graves Commission (CWGC) website lists 16 graves of those that died in the first world war up to November 1918.

The churchyard is split into two main areas, the “old ground” and “new ground”. The references to the grave locations note which area the grave is located in. Three of the graves have family memorials in place of the standard CWGC headstone.

In some cases there is a little extra information on the CWGC site regarding family members.

Other research has included service records, where these have survived, and medal index cards (both via Ancestry.co.uk) along with census records for family and occupation information.

The website “The Long  Long Trail” has also been used for  background information.

The parish records for burials at Heath Town and the Express & Star at Wolverhampton City Archives provided date of burial, place of death and any other information that may have been reported in the local paper.

Charles Arthur Mander and his teammates in the cricket team.

Being from one of the more prominent Wolverhampton families did not excuse military service during the First World War. The 2nd Baronet Sir Charles Mander (seen in this photograph standing on the left) was born on 25 June 1884 at The Laurels, in Newbridge, the eldest son of Sir Charles Tertius and Mary Mander. After being educated at Eton and at Trinity College, Cambridge (where he read Natural Sciences), he joined the family business and eventually became Managing Director of Mander Brothers Ltd paint and varnish manufacturers. On 29 April 1913, he married Monica Claire Cotterill Neame from Kent, and they went on to have three children, Anne Marietta Patience, Corinthia Jill and Charles Marcus, between 1914 and 1922.

He joined the Staffordshire Yeomanry in 1906 and saw active service in Egypt, Syria and Palestine. Charles Nicholas Mander’s Varnished Leaves contains a whole chapter on Mander’s service during the First World War, including transcripts from his journal letters home. In 1917 he was struck by shrapnel in the ankle whilst involved in General Allenby’s advance that led to the capture of Jerusalem. He was able to rejoin his regiment in 1918. Mander left the military holding the rank of Major in 1925, and his medal card can be found at The National Archives.

After the war, Mander became a Conservative member of  Wolverhampton Council for 25 years, including serving as Mayor in 1932-1933 and again in 1936-1937. During his mayoral year Mander founded the Good Companions Club at Horseley Fields and he had an interest in many social service organisations. A keen sportsman, he became President of Wolverhampton Wanderers Football Club and was also a governor and trustee of the Royal Wolverhampton School. He was also a member of the prominent Queen Square Syndicate. There is a blue plaque commemorating his contribution to Wolverhampton in North Street on the front of the Magistrates’ Courts. Mander died in 1951, at his home, Kilsall Hall, Shifnal, aged 66.

The details for this blog post came mainly from the research done by one of our volunteers, Margaret George.

Our volunteers have been busy looking through the local newspapers for First World War stories related to Wolverhampton, and they have already come across lots of interesting articles. Not surprisingly, the war affected all aspects of everyday life. For example, on Saturday 10 October, there is an article in the Express and Star detailing efforts to recruit men to the armed forces who have come to watch a Wolves Reserves match at Molineux. There are numerous articles about recruitment and fund-raising drives, as well as other issues that have arisen as a result of the international crisis.

We have gathered a selection of highlights of these articles onto the WAVE Flickr site. 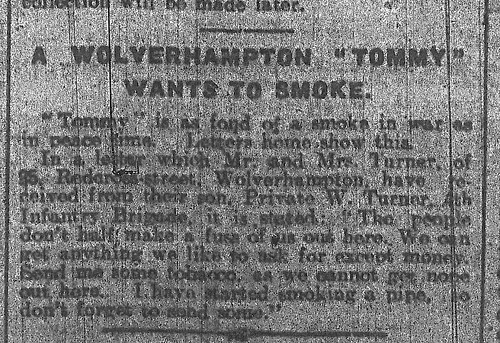 More articles will be added all the time, so please look back when you get the chance!