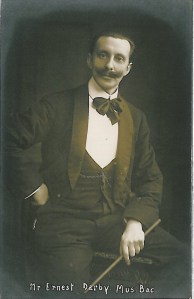 As well as joining the armed forces, people could serve their countries in other ways during the First World War. Ernest Darby served as a Special Constable for Wolverhampton Police Force.

Prior to the First World War, Special Constables were only called upon in times of civil unrest, but the advent of war meant that the Special Constabulary was organised into a body similar to what it is today. Their main function at this point was to prevent German infiltrators from interfering with the nation’s water supply.

The son of Wolverhampton solicitor John Darby, Ernest Darby was born in 1873 and educated at Wolverhampton Grammar School, going on to study Music at Durham University. In 1899 he was appointed Organist and Choirmaster at St Mark’s Church in Chapel Ash. In 1907, together with his wife, Florence Parkes, he established the Wolverhampton Opera Company.

When war broke out in 1914, Darby was 41. Neither his age nor his marital status required his conscription to military service at this time, so he joined the Special Constabulary. 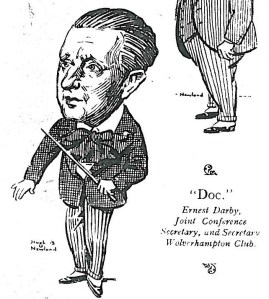 After the war, he took up his musical career again, becoming a prominent member of the Freemasons, and being appointed as Grand Organist in the Masonic Grand Lodge of England. His later address in Wolverhampton, 7 Summerfield Road, has a blue plaque to “Dr. Ernest Darby and Madame Parkes Darby musicians [who] lived here 1932-1976”.

3 thoughts on “The Musical Constable”